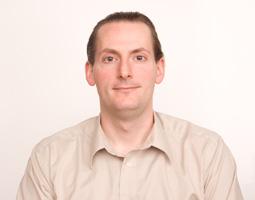 Prof. Askew received his Ph. D from Rice University in 2004 in Experimental Particle Physics. Afterwards, he was a postdoctoral research associate, first with Florida State, and later with Rutgers University, splitting time between the D0 experiment at Fermi National Laboratory, and the CMS experiment at CERN. Prof. Askew works with the FSU High Energy Physics group, on the cutting edge of particle physics research with both the D0 and CMS experiments.

Prof. Askew's research interests include production properties of the electroweak gauge bosons at the Tevatron, including measurements of the momentum distribution within the proton, and the production of pairs of bosons. A recent result on the simultaneous production of both massive gauge bosons is published (Phys. Lett. B 695, 67 (2011)) and was highlighted as a Fermilab result of the week (6/10/2010). In addition to this, Prof. Askew is engaged in searches for physics beyond the current standard model of particle physics using both the D0 experiment (Phys. Rev. Lett. 104, 061801 (2010)) and CMS experiment. His work on CMS focuses on final states with photons (some very early results are available here http://cdsweb.cern.ch/record/1279147/files/SUS-10-001-pas.pdf). The potential of the Tevatron dataset and the higher energy LHC data being collected by the CMS experiment holds exciting challenges as a new era of particle physics begins.