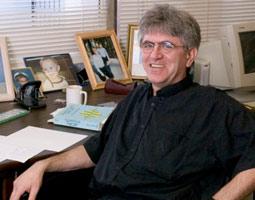 Dr. Manousakis received his Ph. D. in Theoretical Physics, in July 1985, from the University of Illinois at Urbana-Champaign (First Ross J. Martin Award for his thesis). After a Post-Doctoral Research position at the Center for Theoretical Physics at the Massachusetts Institute of Technology (1985-1987) and at the Supercomputer Computational Research Institute (1987-88), he joined the Martech faculty in the Physics Department of the FSU.

Dr Manousakis' group develops and applies computational and theoretical methods to study novel collective behavior in certain quantum many-body systems which arises because of strong correlations among the fundamental microscopic degrees of freedom. Examples of such systems are: (a) Superconductors and Strongly Correlated Electrons, (b) Superfluids, (c) Electrons in solids and correlations in the electron gas, (d) Quantum phase transitions in atomically-thin films and in restricted geometries and (e) Topology and superconductivity of Weyl systems.