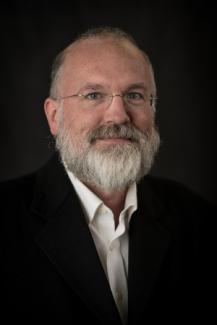 Dr. Gregory S. Boebinger received Bachelors Degrees in Physics, Electrical Engineering and Philosophy in 1981 from Purdue University. He studied one year at Cambridge University as a Churchill Fellow, after which he entered the Massachusetts Institute of Technology in Fall 1982, where he held Compton and Hertz Foundation Fellowships. His thesis research utilized high magnetic fields and ultra-low temperatures to study the fractional quantum Hall effect with Nobel Laureates Horst Stormer and Dan Tsui. The fractional quantum Hall states are many-electron collective states found in two-dimensional layers of electrons in the presence of strong magnetic fields. They exhibit features in common with both superconductivity and superfluidity; however, the fractional quantum Hall states are strikingly unique in that they exhibit fractional charge, that is, particle-like excitations that are composites of magnetic-field flux quanta and electrons, yet exhibit charges equal precisely to one-third of an electron charge. After receiving his Ph.D. in Spring 1986, Dr. Boebinger spent a year as a NATO Postdoctoral Fellow in Paris at the Ecole Normale Superieure studying other quantum behaviors of electrons in quantum wells.

In 1987, Dr. Boebinger joined the research staff at Bell Laboratories and established a unique pulsed magnetic field facility for physics research on semiconductors, f-electron compounds and superconductors in magnetic fields up to 60 teslas, more than one-million times the Earth's magnetic field. For this research, he was named a Fellow of the American Physical Society in 1996.

In 1998, Dr. Boebinger became head of the pulsed magnet laboratory at Los Alamos National Laboratory, one of the three campuses of the National High Magnetic Field Laboratory (MagLab). In 2004, Dr. Boebinger moved to Florida State University to become director of the MagLab, with responsibility for all three campuses: the headquarters at Florida State University, the pulsed magnet laboratory at Los Alamos National Laboratory, and the ultra-low temperature and magnetic resonance imaging laboratories at the University of Florida. The MagLab is the world leading magnet laboratory, developing and operating high magnetic field facilities that more than 1700 scientists use annually for research in physics, biology, bioengineering, chemistry, geochemistry, biochemistry, materials science, and engineering. More information can be found on the MagLab's website: nationalmaglab.org

Prof. Boebinger is keenly interested in communicating science to the general public. His outreach has included commencement addresses, public lectures and demonstrations on levitation at Aspen's Wheeler Opera House, at Bell Laboratories, Los Alamos, and the Getty Museum. He has appeared on the History Channel and Discovery Channel and has written articles for Physics Today and Scientific American. He has a special interest in the historical development of materials research and the interplay of the Arts and Sciences.