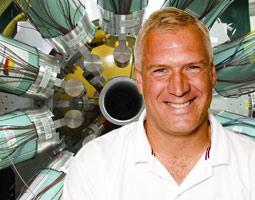 Nuclear structure physics in exotic nuclei
Much of the work of nuclear structure physics during the last sixty years has focused on the shell structure of the nucleus.  However, our understanding of nuclear shell structure has been built upon measurements of nuclei that are stable or nearly stable.  The technology for producing beams of nuclei that are very unstable and are at or near the proton and neutron driplines has made great advances during the last twenty years, as demonstrated at the Coupled Cyclotrons Facility at the National Superconducting Cyclotron Laboratory at Michigan State University.

Measurements of these near-dripline nuclei - particularly neutron-rich nuclei near the neutron dripline - test predictions that dramatic changes in shell structure occur in this vicinity.  Our paper in Nature on the neutron-rich nucleus 42Si [J. Fridmann et al., Nature 435, 922 (2005)] demonstrated that a proton subshell occurs at proton number 14 and raised questions regarding the predicted collapse of the major shell closure at neutron number 28.

Based on a design developed by the Physics Education Research Group at North Carolina State University and proven at a number of institutions, the FSU Science Studio in the New Classroom Building is hosting its first classes in the spring of 2007.  The classroom is intended to foster inquiry-based teaching and learning with a fiscally sustainable class size of 72 students.  In the spring of 2007, the Studio is hosting two physics classes:  The Physics of Light and Sound (PHY 1075C), a course intended for students majoring in a non-natural science field who have a professional interest in light and sound; and Physical Science for Elementary Education Majors (PSC 2801C), which uses a research-based hands-on curriculum developed by the Physics Education Group at the University of Washington.