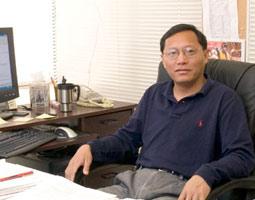 Peng Xiong received his B.Sc. in Physics from University of Science and Technology of China in July 1987. He received his Ph.D.in Physics from Brown University in September 1993, with a thesis covering topics of high temperature superconductivity, magnetic granular solids, and mesoscale superconductivity. He then spent the next four years as a postdoctoral fellow at the University of California at San Diego, performing research in superconductor-insulator transition and fluctuation effects in two- and one-dimensional systems. He joined the Physics faculty of the Florida State University in November of 1997. He is a member of the Integrative NanoScience Institute (INSI). He was a recipient of the Alfred P. Sloan Research Fellowship (1998), University Teaching Award (FSU, 2003), PAI Award for Excellence in Research and Teaching (FSU, 2004), and Developing Scholar Award (FSU, 2007). He became a fellow of the American Physical Society in 2012.

His research activities can be loosely categorized into the following three areas: