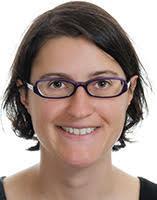 Dr. Yohay's research attempts to elucidate the interactions between elementary particles at the electroweak scale. As a member of the Compact Muon Solenoid (CMS) Collaboration at the Large Hadron Collider (LHC), she uses data collected by the CMS detector to search for rare signatures that may portend the existence of new light fundamental scalars--essentially, cousins of the Higgs boson. Such particles are predicted by supersymmetric, hidden valley, and Higgs portal models that address some of the shortcomings of the Standard Model of particle physics--for example, the unnatural smallness of the weak scale as compared to the Planck scale, or the lack of a viable dark matter candidate. Since these particles are light, but rare, the enormous luminosity of the LHC provides a rich dataset in which to search.

Along with data analysis, Dr. Yohay is involved in the operation of the CMS pixel detector. The pixel detector lives just centimeters from the CMS interaction point and provides a position resolution of tens of microns for primary and secondary (from the decay of long-lived B hadrons) interaction vertices. Its silicon detecting material receives a large dose of radiation damage and must therefore be properly maintained and calibrated throughout the course of an LHC run. Dr. Yohay's group is involved in detector calibrations, radiation damage monitoring, and commissioning of repaired components.

By the end of Phase 1, the LHC will have collected approximately 300 inverse femtobarns of data, or one-tenth the total expected from Phase 2. Phase 2, also known as the High Luminosity LHC (HL-LHC), will run from 2027-2036 with much more intense beams than Phase 1. Much of the CMS detector will have to be upgraded to cope with the increased intensity. Dr. Yohay is deeply involved in the construction of a new CMS endcap calorimeter for the HL-LHC. The so-called High Granularity Calorimeter (HGCAL) uses 6 million channels of large silicon pixels and scintillator tiles to image electromagnetic and hadronic showers in unprecedented detail. Such detail is crucial to identifying particles of interest among a large background. At Florida State, Dr. Yohay's group will perform quality control testing for a large fraction of the silicon sensors used in the HGCAL.