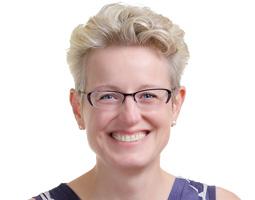 Dr. Blessing received her Ph.D. degree in experimental elementary particle physics from Indiana University in 1989. After postdoctoral work at North Western University, she joined the FSU faculty in 1994. Dr. Blessing's current research interests include the search for new phenomena in proton-antiproton collisions. Her research is carried out at the Fermi National Accelerator Laboratory near Chicago, IL. She is a member of the team of experimentalist who performed one of the two experiments leading to the discovery of top quark in Spring 1995.

Dr. Blessing is a member of the D0 Collaboration at Fermilab and is interested in electroweak physics and the search for New Phenomena. She is presently involved in a measurement of the W boson production asymmetry in the muon channel. In the past, she has searched for the supersymmetric partner of the top quark and first generation leptoquarks, and, while working on another experiment, for glueballs.

D0 is a proton--anti-proton collider experiment which recently underwent a significant upgrade. The FSU Experimental High Energy Physics group was responsible for various parts of the upgrade: the silicon tracker trigger, graphics, muon reconstruction software, as well as other tasks. The group is presently responsible for calorimeter operations, and are involved a new upgrade of the Level 1 calorimeter trigger and in the new Layer 0 silicon detector which will surround a new (smaller) beam pipe.