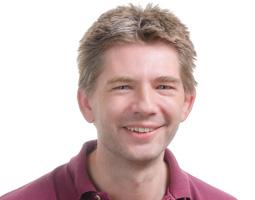 Dr. Crede received his Ph.D. in Experimental Physics, in August 2000, from the University of Bonn in Germany, where he studied isospin relations in antiproton-deuteron annihilations at rest and searched for quasinuclear bound states. He spent additional three and half years as a post-doctoral researcher at the Helmholtz-Institute of Radiation and Nuclear Physics at the University of Bonn working on exciting and studying subnuclear systems with electromagnetic probes. In 2003, he was awarded a Feodor-Lynen research fellowship by the Alexander von Humboldt Foundation to investigate the production and decay of D mesons in electron-positron annihilation processes at Cornell University. In December 2004, Dr. Crede joined the faculty in the Physics Department at FSU.

Dr. Crede's research interests focus on the subnuclear structure of matter and the search for so-called "missing" baryon resonances, i.e. experimentally not established baryon states which are however predicted by most quark models based on three constituent quarks. The excited states of the nucleon (proton, neutron) cannot simply be inferred from cleanly separated spectral lines as known from atomic physics.

Quite the contrary, a "spectral analysis" in nucleon resonance physics is challenging because of the fact that the resonances are broadly overlapping states which decay into a multitude of final states involving mesons and baryons. The various possible production and decay channels must be treated in a multi-channel framework that permits separating resonance from background contributions. Very often, resonances reveal themselves more clearly through interference with dominant amplitudes. These interference terms can be isolated via polarization observables.

Nucleons can be excited experimentally using electromagnetic probes. Dr. Crede's research uses a beam of real photons incident on a liquid hydrogen (proton) target as well as incident on a polarized butanol target.

1. Jefferson Laboratory (JLab), Newport News, Virginia
The group is involved with experiments carried out in Hall-B at JLab using the CEBAF large acceptance spectrometer (CLAS). The research activities focus on the investigation of nucleon properties using a polarized tagged-photon beam and a polarized target. Dr. Crede submitted a proposal on the "Measurement of Double-Pion Photoproduction in Double-Polarization Experiments using CLAS". This proposal is part of the N* program at JLab and received an A- rating from the Program Advisory Committee. The group is involved with the development of a frozen-spin (butanol) target (FROST) and measurements are scheduled for 2007/2008.

2. ELectron Stretcher Accelerator (ELSA), University of Bonn, Germany
A large variety of possible production and decay channels must be measured in order to provide a consistent and complete picture of an individual nucleon resonance. The Crystal-Barrel Experiment at ELSA and CLAS at Jefferson Lab form a complementary set of detectors to study baryon resonances by capitalizing on multi-photon (from the decay of neutral mesons) and charged-particle final states, respectively. Dr. Crede is a co-spokesperson on a proposal to measure the "Helicity Difference in the Reaction gamma proton -> proton pi0 eta, which was awarded an A- rating in 2005. The Program Advisory Program appreciated the new possibilities offered by 3-body final states to find hitherto unknown highly-excited nucleon resonances.