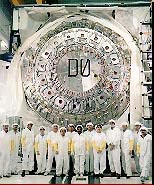 The experimental High Energy Physics (HEP) program at Florida State University is currently engaged in major programs at the Fermi National Accelerator Laboratory (Fermilab), near Chicago, and at the European Center of Nuclear Research (CERN) just outside Geneva, Switzerland. At Fermilab we use the world's highest energy (1.96 TeV) proton-antiproton collider to study the fundamental structure of matter. The detector, called DØ, was built by an international team of scientists, of which we are active members. Our principal research interests are the physics of the top quark, where we made critical contributions to its discovery and measurement, as well as study of the physics of photons, electroweak bosons, and jets. We are also leaders in the search for, and eventual discovery of, new phenomena - such as those arising from supersymmetry and the leptoquark hypothesis - that are not predicted by the Standard Model of particle physics. The DØ experiment is now engaged in a decade long program that has collected a large, high quality dataset that is revealing the beauty of the Standard Model with 200 publications to date.

At CERN, we are members of the Compact Muon Solenoid (CMS) experiment that uses proton-proton collisions at a center of mass energy of 7 TeV, the highest energy collisions ever achieved in a laboratory, using the Large Hadron Collider (LHC). After an initial run through 2011, the accelerator will be configured to run at full design energy of 14 TeV center of mass energy. The CMS detector is 22 meters long, has a diameter of 15 meters, weighs 12,000 tons, and contains a 4 Tesla magnet. We hope to observe the Higgs particle and the multitude of phenomena predicted by supersymmetry and other new theories.

The High Energy Experimental physics program at Florida State University was established in the late 1950's by Prof. Joseph Lannutti, the first such program in the southeast. Over the past fifty+ years, we have participated in and led a wide range of experiments at Fermilab, CERN, Argonne National Laboratory, Brookhaven National Laboratory, DESY (in Germany), Lawrence Berkeley Laboratory, and Stanford Linear Accelerator Laboratory. Our group covers a diverse range of expertise ranging from detector development to the use of advanced analysis methods. We represent our collaborations at numerous conferences each year and our former graduate students have gone on to university, laboratory, and industry positions throughout the world. In summary, the Florida State University High Energy experimental group has a diverse and exciting program that promises many opportunities for scientific work on the forefront of basic science.